“Blessed are they that have not seen, and yet have believed.”

When I was a child, I would go hunting butterflies in the field, and wood, enjoying myself so much I lost track of time. Sometimes I didn’t notice where I was and I lost my way after dark.

The way the eyes of human beings function is not the same as that of butterflies.

Human eye cells can easily distinguish colors, for example, red, green, and blue. However, man cannot see ultraviolet rays, whose wavelengths are shorter than the three colors but which have longer infrared rays.

Surprisingly, swallowtails have the power to discern ultraviolet. 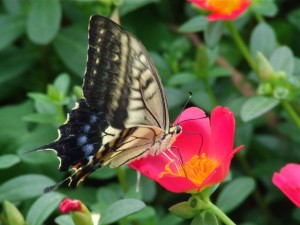 That’s why butterflies get honey which people cannot see fimbriae at the center of flowers. This enables them to get as much nectar as they want from flowers.

About two thousand years ago, Jesus Christ said to skeptical Thomas who was one of the disciples, “Blessed are they that have not seen, and yet have believed.” Other followers witnessed, “We have seen the Lord.” but Thomas said, “Except I shall see in his hands the prints of the nails, and put my finger into the print of the nails, and thrust my hand into his side, I will not believe.” Thomas insisted that he was different from those who believe with a simple faith, his eye is far more penetrating.

How about our insight? Do we have our own eagle eye?

There was a genius artist whose name was Van Gogh. One day in his childhood, his father said to him, “What are you doing now in such a place?”“I’m looking at stars.”“Oh,yeh. the stars are beautiful. The color is gold, silver.” “No!” Van Gogh shook his head and said, “Light blue like the sky in the daytime, see, look!” His father was frightened to hear that, and so he went into the house. Van Gogh judged it with his eyes. The way he sees things is different from ordinary people.

Butterflies can see ultraviolet rays, but humans cannot. We need a certain type of eyesight to live.

As “Blessed are they that have not seen, and yet have believed.”is written in the Bible, we are sure that there is an unseen hand to lead us to the fullfillment of God’s Will in accordance with His vision, hope, love, and freedom.

We must develop and cultivate a common idea on the basis of global joint among view of the value of things we cannot necessarily see for ourselves.